1866 – It was a dark night.  The trees overhead barely allowed any light from the full moon to trickle through their tangled cover.  A lone rider on horseback made his way down a rutted wagon path through thick pines.  He reached down to feel the heavy saddlebags of coin secured to his saddle.  It was $2,700 bound for the newly created Freedman’s Bureau in Vernon, Louisiana and it was Lieutenant Simeon G. Butts’ mission to get it there.

He’d spent a few nights before dining at St Maurice, a plantation house overlooking the Red River, before continuing on his journey, down the Harrisonburg Road.   Settlers heading out west to Texas had used this rough track as a way to link the Natchez Trace to the El Camino Real since way before the war. It had always been remote, but these days, with disgruntled Confederate vets returning home defeated and with less than the nothing they had before the war, times were particularly dangerous.  A fact that Lieutenant Butts would face before the night was out.

Today, driving through the stretch of land between the Mississippi and Red Rivers, seems mostly  unremarkable.  Many country roads winding among pine thickets with not much in the way of visual interest. A few small towns.  A few farmhouses. You would never imagine the dramatic events that unfolded in this area a century ago.

In the days immediately after the end of the Civil War, things were very difficult in the South.  The Union Army was an occupying force.  Scavengers and opportunists descended like buzzards to pick the remaining flesh from the bones of a wounded and beaten people.  Rumors of robbery and rape weren’t uncommon in these dark days, although this part of the story never really made the history books. Local communities created home guards to protect themselves from the realities of Reconstruction.  It was in this environment that John West and Lawson Kimbrel found each other.

From all accounts, both men were bad seeds far before the war.  The Kimbrel family lived just off the Harrisonburg Road near Wheeling, Louisiana.  They ran a store and saloon, as well as provided overnight accommodation to travelers passing through on their way to Texas.  At the time, they were upstanding citizens of the community.  Attended Mt Zion United Methodist Church and, for the most part, were well thought of by most of their neighbors.  Lawson, or Laws as he was called, was one of several children born to Uncle Dan Kimbrel and his wife Polly.  No one questioned why they seemed to be financially better off than anyone else, Uncle Dan and Aunt Polly had 22 slaves in an area where most people couldn’t even afford a decent roof over their heads.

Where did the money come from?  Winn Parish in those days was a remote farming community, which didn’t offer much hope for riches. Although the truth didn’t come out until years later, it seems the Kimbrels made their money by nefarious means. They would lure travelers to overnight with them – offering a respite from the long journey west many of them were on.  Unfortunately countless numbers of these overnight guests never saw the morning light.  Seeing opportunity in the wagons, horses, and other possessions these travelers had with them, the Uncle Dan and Aunt Polly, along with some help from their children at times, murdered many travelers during the night.  To prevent suspicion, they would dump the bodies down wells they’d dug by hand around the farm. It is claimed that the bones of up to forty people were found in one well on the Kimbrel property alone. 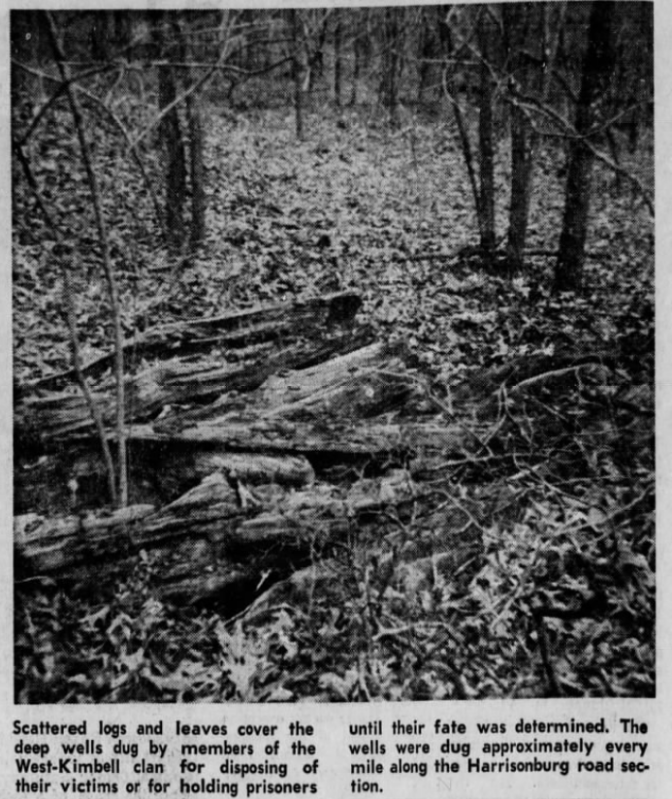 It was this world that Laws Kimbrel grew up in. After the war ended, Laws returned home, along with John West and others.  They became key members of the innermost circle of the home guard.  While the outer circle thought they were protecting home and hearth from the opportunists that flooded the area after the war, the inner circle used them as a cover for more illicit activities.

It was West and Kimbrel, along with other members of the gang, that ran across young Lieutenant Butts and his gold coin as he road along that night in 1866.  The encounter would leave Butts dead by a spring, with a bullet hole in his head and the coin gone.  His body was found some time later, but it would be years before his murderers were known.  To this day the place where he was found is called Yankee Springs.

Because of the protection of locals and their knowledge of the land, the West-Kimbrel Clan successfully operated in Winn Parish, Louisiana for a number of years. It is said they carved Native American symbols into tree bark to communicate. As Uncle Dan Kimbrel had done before them, they hand dung wells along the Harrisonburg Road.  These wells were used to hide the bodies of their victims quickly, so they didn’t leave behind witnesses to their crimes.

It wasn’t until the spring of 1872 that the gang met its end.  A falling out between West and another member of the inner circle escalated events until the local citizens stepped in to stop the violence.  A posse was formed, the gang cornered, and most of them were killed.  John West had his head removed by a shotgun blast.  Legend has it that his skull sat on a fence post in Winn Parish for many years afterwards….as a warning.  Lawson Kimbrel escaped to Texas, but was hanged for another murder a few years later.

To this day, those that know where, can still find places in the woods around Wheeling pockmarked by deep holes – all that’s left of a time when lawless men ruled the area.  Although some of the wells are boarded up and others filled in and lost to time, myths and rumors persist.  Stories float around of lost gold, stolen by West and Kimbrel and hidden among the pines.

Some believe it is still out there, waiting to be found.

One thought on “Another Time and Place”