It still sits on the same spot overlooking the Cooper River as it has for over two centuries.  Once visitors arrived by boat, gathering from nearby plantations about once a month to hear the gospel.  These days, visitors arrive mostly by car, ambling up a worn dirt track under a canopy of green.  They come less frequently now, mostly with camera in hand instead of God’s good word, but regardless of the how they arrive, they still find  a building with sublime symmetry and grace that has withstood the test of time. 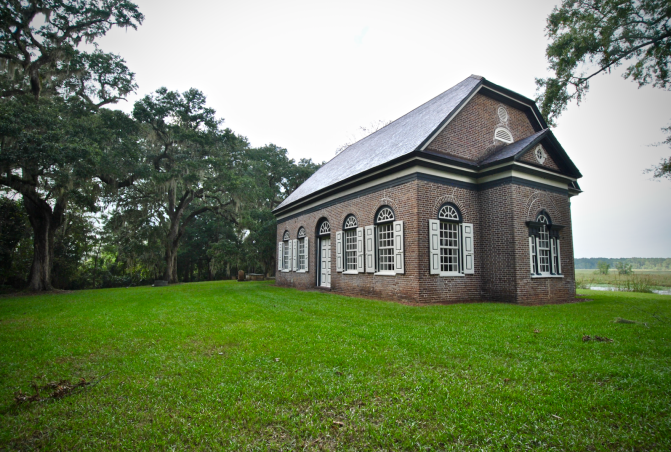 Berkeley County, South Carolina was once on the American frontier. In the 1680’s, French Huguenots arrived after fleeing France to escape religious persecution.  They bore names such as St. Julien and Ravenel, today some of the oldest family names in the Lowcountry.  Among these French settlers was Pierre de St. Julien de Malacare – owner of Pompion Hill Plantation and, incidentally, my ninth great grandfather.  It included the land occupied by the chapel today and is most likely how the chapel got its name.

It wasn’t long before the French were joined by the English.  Each group was a unique community, with separate languages and customs, as well as separate churches, but one thing bound them together, a desire for riches.  And the land would provide. Both established large plantations up and down the river and both relied on slave labor from Africans and Native Americans to see their lands produce.

In 1706, the Colonial Assembly designated ten Anglican parishes.  St Thomas and St Denis Parish was one of the them – the name signifying the English/French mix of the population.  As one of its first acts, the assembly appointed an English minister named Thomas Hasell for the parish.  Hasell took up the pulpit in the existing wooden church which had originally been used by the French Huguenots. As he set about doing God’s work, Hasell himself referred to the area as “this Wilderness…”, but over time the French adapted to the Anglican traditions.  Services that had once been in French, slowly migrated to English as the congregations merged into one.

Hasell spent over thirty years shepherding the parish and become a rich man in the process.  When he died, he was buried at Pompion Hill, the plantation he had purchased from the St. Julien family. Today, Hasell’s grave has been lost as the Cooper River has changed course over time, but his lasting legacy is guiding the mergence of these two religious cultures into one.

The church building that stands today is the one that was built in 1763 to replace Hasell’s church.  A total of £4,000 was spent constructing the chapel. Carpenters were brought from Charleston to construct the red cedar pulpit and the brick used was provided by a local planter.  The walls are laid in a Flemish bond pattern and the slate on the roof is original.  By the time the church was completed, the language barrier and frontier feel of the early parish had disappeared. Like the rest of the fledgling colonies, a uniquely American culture was emerging and people were prospering. 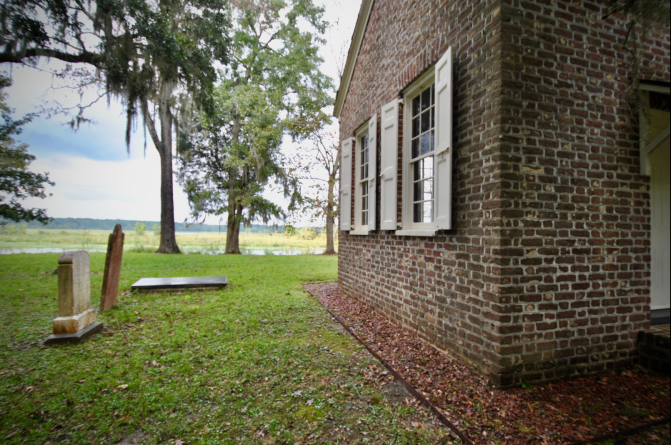 After all, what else could have happened to an English church with a French name?

All photos taken by Heather Bean.  Please do not use without written permission.

2 thoughts on “Shall We Gather at the River”