It was a Sunday.  The time of the week where most of the world pauses to escape the rigors of life in a modern world. Somehow, here, in this place, it seemed just like another day – the pace as slow and measured as it had been for centuries.  Despite the beautiful weather, it was hot – one of those days where just breathing was exhausting due to the thickness of the air. In many places, sugar cane stretched as far as the eye could see – its green tops waving in the breeze off the nearby Mississippi River.  Although the levee obscured any actual view of water, the presence of the river was constant and irrefutable.

The house itself sat a good way off the highway and across from the green rise of the levee.  I turned off the blacktop road and made my way up a white gravel drive that contrasted quite brilliantly with the green summer grass. Coming to a stop in front of the house, I cut the engine and stepped out into the scorching sun of the late June day.  All was quiet except a few birds chirping and the buzzing of insects flying over the ankle high grass.

Looking up, the house seemed forgotten, its doors and windows shuttered against the elements and closed to the modern world.  Although it had a sturdy, somewhat new metal roof, the house itself had seen better days.  It had been built in the late 18th century on a parcel of ten thousand acres granted by Spain and had survived all these years intact and whole, a tangible witness to history.  Touch the brick of the walls and you are touching the same surface as someone two centuries ago. 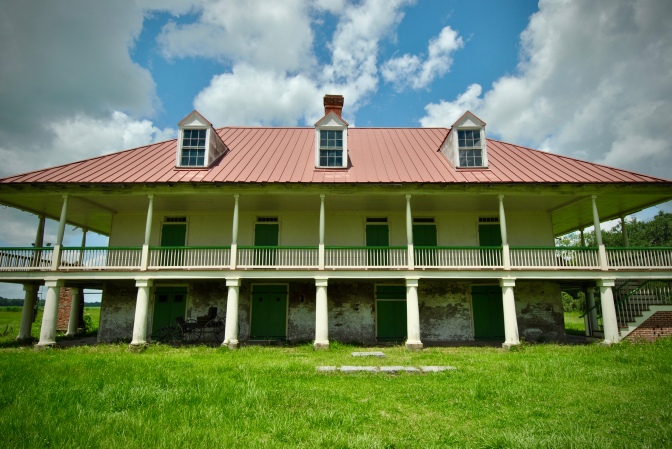 Two floors, each with wide, wrap-around verandas, sat one on top of the other.  The lower level was comprised of bricks handmade on site over two centuries ago.  The same brick had been laid in a herringbone pattern to create the lower veranda.  Above, the second floor walls were made from hand-cut cypress overlaid by bousillage – a mixture of clay and Spanish moss.  The walls were a foot thick all around and had provided shelter from the scorching heat of south Louisiana for centuries.  The bright green shutters were original to the house, still serving the same purpose they always had. Their iron work, also forged on site in the early days, now threatened to rust away. 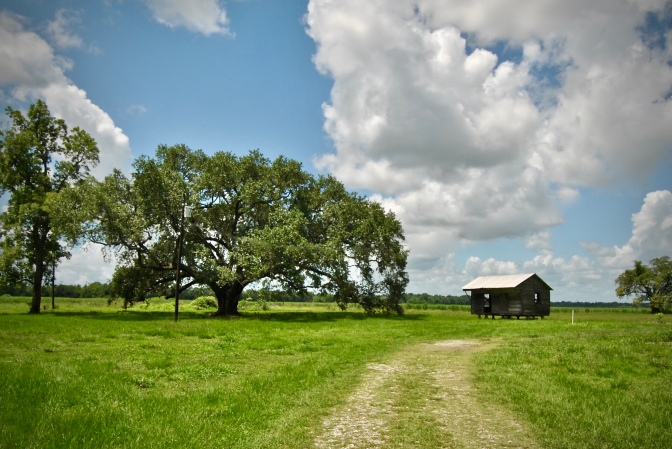 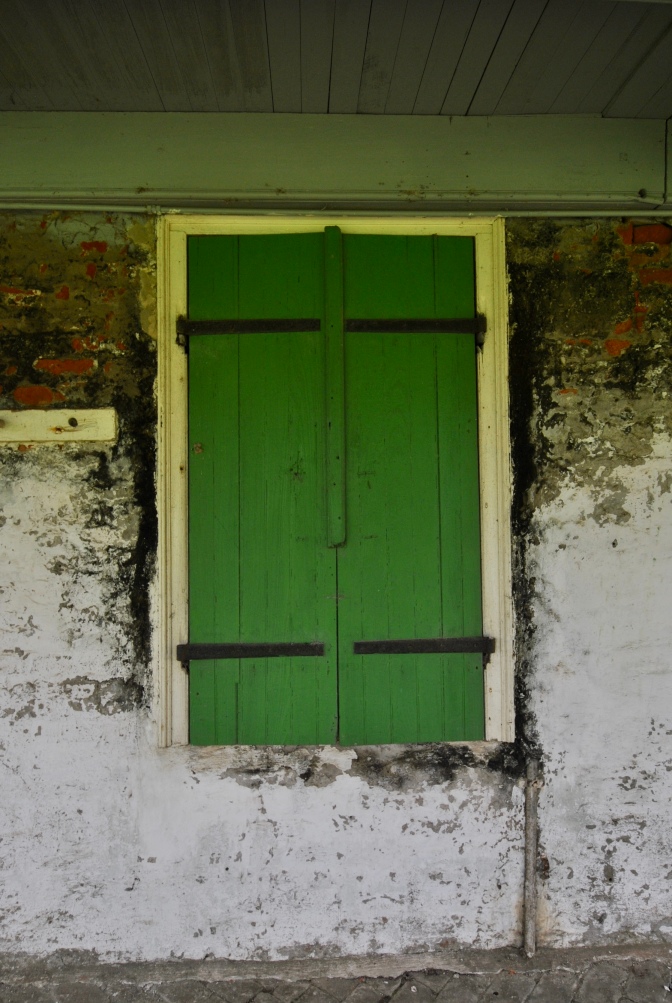 Beneath the shelter of the lower veranda was a 19th century doctor’s carriage. It, like the house, had seen better days.  Both sat, patiently waiting for restoration. Behind the house were two hundred year old oaks – they remained even though the old kitchen house they once sheltered was now gone. Twin staircases sat on opposite corners of the house – an original feature of the home.  Originally a dining room existed on the ground level and although closed to modern eyes, the room still allegedly retains its original Italian marble floor.

Because of the lack of commercialization, this place is special.  It feels authentic and real, but you can’t help but wonder how long it will last. Each decade more of this place disappears.  Once there were many outbuildings in addition to the main house.  These included pigeonnieres, cisterns, and a kitchen – now all are gone – lost to time and neglect.  All that remains of a sugar mill that once stood on the property are a few cast iron sugar kettles, most recently used to water livestock.

One day, another traveler might come down the River Road, look out into this same field, and see nothing but cane.  Without protection, this house, like many, many others, will eventually fall into ruin and disappear -a last vestige of a way of life now gone..and one of the last links the South has to its debatable, but proud, past.

But on that particular Sunday, I stood there in the heat and imagined….days of soft, warm breezes shuffling through the live oaks and across the veranda of a house that was once a home…in a place that was once relevant, but now lies slowly dying in the heat.