London is my town.  A place I could go back to time and again and each time is always like the first.  So I can’t think of a better place to spend my birthday.

We’d been traveling for work for a week.  Munich, Berlin, and everywhere in between.  On our way back towards the US, we decided to stop off in London for a couple of days.  We’d flown in early that morning from Berlin and now found ourselves in the heart of the old city near the Tower of London….and I had only one thing in mind – lunch.

On a previous trip I’d been walking around Tower Hill, that portion of the old city where they used to make a spectacle out of lopping off people’s heads (and other things) back in the Middle Ages, and found it – The Hung, Drawn, and Quartered.  Back then it wasn’t near as posh as it is now – but it still is my all time favorite pub in London.  Where else better to grab a birthday lunch?

It’s name harkens back to a favored execution method used for traitors in the glory days of medieval London.  Back then, those convicted of high treason were taken from the nearby Tower of London and marched up the hill to a gallows.  Here, high above the ravenous mobs assembled to watch the show, the convicted would be hung by the neck until almost dead.  Just before they stopped breathing, the noose would be removed and about the time they regained consciousness, phase two began.

If the convicted was still conscious at that point, they would have felt, and perhaps seen, their entrails burned before their heart was removed and the body decapitated.  Next,  the body was quartered (yes, cut into four pieces) and the parts would be sent to the four corners of the kingdom as a warning to others.  Nice huh?  And just the thing to make you ravenous for lunch!

We entered the pub through heavy wooden doors.  Proudly displayed in the center of each door was a brass lion head.  Colorful, quintessentially English window boxes adorned the windows with riotous displays of color spilling over the edge and down the red brick. 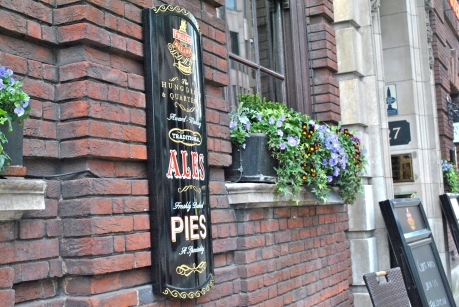 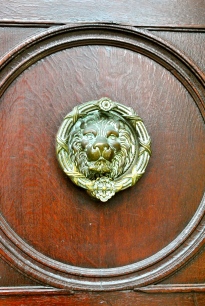 After being out in the bright of the day, the cavernous interior that greeted us as we walked through the heavy doors was refreshing.  We were immediately absorbed into the hustle and bustle of a normal workday crowd of young professions who was already gathered for lunch. Inside, the pub is surprisingly cozy, but the decor is interesting to say the least.

We ordered one of the yummy lunch specials and of course the recommended beer (it was my birthday lunch after all).  What arrived was the biggest puff pastry on top of a mountain of potatoes – pie and mash as they say in London.  Inside was chicken, veggies and lots of other yummy things.  I soon realized that I might need a nap after this undertaking.