Old North Church.  I’d been trying to get there during three trips to Boston.  The first two times we arrived after closing time, but today, today would be the day – I had confidence.

We approached from the back through the narrow streets of Boston’s North End.  This area of Boston is the oldest residential community of the city, with people making their homes here since at least the 1630’s.  Today it is a hub of Italian-America, with restaurants on every corner filling the streets with the intoxicating smells of fresh bread, garlic, and all sorts of spicy concoctions from the old country. As we walked along during the early afternoon, our eyes and ears soaked up all the hubbub around us.  There were old ladies sitting on their front stoops watching the world go by; men standing outside local shops, chatting in that boisterous way that only Italians have mastered; and people closing up shop for the day by pulling metal gates down over their store front before locking things up and strolling up the street to home.

We made our way through these lively streets, past the most famous reminder of why the Old North Church is burned into the history books of America.  Paul Revere.  The man who made a ride on horseback over two hundred years ago.  During that time Boston was an occupied city – the British were encamped there and would make raids around the area to uncover stashes of weapons the colonists were stockpiling.  Revere devised a way of using signal lights in the tower of Old North to alert riders across the river of the route British troops would take to Charlestown.  “One if by land, two if by sea” – this phrase referred to the number of signal lights in Old North.

On the night of April 18, 1775, the church caretaker and a vestryman of the church climbed the narrow stairs at the rear of the church, walked through the gallery and squeezed behind the organ to access the tower.  They then climbed stairs and ladders up eight stories in complete darkness to the very top of the tower.  Once there, they lit two lanterns using flint and steel.  They only allowed them to burn for 60 seconds, but that was long enough to alert those on the opposite site of the river that the British were on their way by sea. As this was happening, Revere took off on horseback towards Charlestown.  He arrived to the good news that the signal had been received.  The next morning when the British arrived, the Americas were waiting for them, armed and alert.

Knowing this story as I stepped into Old North for the first time had me scanning the inside for the stairs these men might have used.  I soon found them, one on each side, tucked away in both back corners of the church. I felt a connection to this place and the events of that night long ago, partly because of my life-long passion for history, but more simply because April 18 is also my birthday.

It was a beautiful day and the church windows were open to catch the afternoon breeze.  Staring at those old, tread worn stairs, you could imagine the sound of rapid footfalls as the men raced up the stairs. Knowing these men made this climb in the dark of night, behind the locked doors of the church, fearing discovery, was a sobering thought and one that gives some insight into those early, desperate days of our country.

Old North itself has been around since 1723, but parts of the church buildings go back about ten years earlier to 1713. The church interior is bright and airy and has the feel of a traditional English church.  You can’t get much closer to history than sitting in the pew purchased by Paul Revere’s son (pew #54).  Each pew was owned by a particular family at some point in the church’s history. 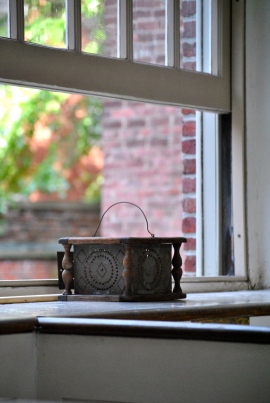 Pew 18 is connected with the “original” Siamese twins Eng and Chang.  Captain Abel Coffin, Sr. owned this pew and he traveled to the far east in the early 1800’s, bringing back the brothers upon his return. One could spend several hours just exploring the history of the pews alone.

It really is amazing this old church became the beacon for the patriot cause as it’s congregation was actually loyal to the Crown.  Even the silver religious reliquaries used for ceremonies in the church were a gift of the king. The church sexton, Robert Newman, who helped light the lanterns that fateful night, lived with his mother nearby.  They actually rented rooms to British soldiers during the occupation, so the idea of him sneaking out to help his good friend, Paul Revere, a member of the Sons of Liberty, shows how secretive these men had to be to pull this off.  Supposedly after helping light the lanterns, Newman left via a back window of the church to go back home to his bed.  The window in question is marked to this day at Old North, although it is now bricked up (see below).

Newman was arrested the next day, but only because he was one of few who had keys to the church.  He was released after lying about lending the keys to someone else. Later on in his life, he sold what was supposedly the last remaining lantern from that faithful night for an unknown amount of money.  To this day no one can verify if this lantern truly was one of the originals. Newman spent the rest of his life as sexton of Old North, committing suicide almost 30 years later. He is buried at nearby Copp’s Hill Burying Ground.

We spent about an hour soaking up the atmosphere of Old North, but I could have spent much longer.  Just sitting in a pew, with the sun streaming in via the open window and a slight breeze stirring the air, it is a history buff’s joy just to watch dust mites dance mid-air in such a space.  Although there were a few visitors milling about, it was surprisingly quiet, just the sound of birds singing through the open window and voices echoing up from the narrow streets nearby.  All in all, a beautiful experience.

(Eng and Chang photo courtesy of The New York Post – all other photos by the author).