The Louvre.  The name commands attention.  Not just for the treasures it holds, but also for the building itself. Visit at night if you can.  Sit in the darkened main courtyard, near the famous pyramid, and imagine the screams of those who perished during the St Bartholomew’s Day Massacre in the 16th century.  Yes, it happened here.  Up to three thousand French Protestants were hunted down and slaughtered in Paris alone and the Louvre was the epicenter of it all.

This image stays with you as you enter today’s museum via the giant glass pyramid.  Descending into its belly via an escalator, you see modern tourists, most of whom don’t even realize the Louvre’s role in the history of France.  The building began life as a fortress, not a museum. 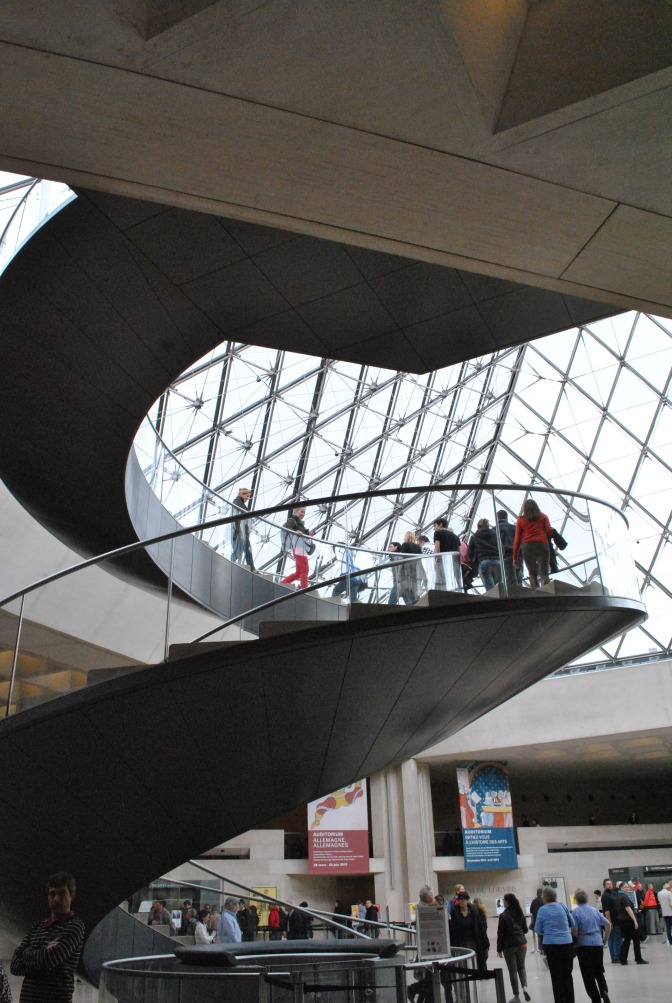 Built originally in the 12th century, it has changed its face many times over the centuries.  From fortress it evolved into a palace, the likes of which could rival any other royal palace in the world. Today you are given a wonderful opportunity to compare the two as the original foundations have been exposed and comprise one of the permanent exhibits near the main lobby.  And this is the best place to begin any tour of the Louvre. Walking around the original, exposed foundations, you realize that the Louvre was once built for keeping people out, not welcoming them in.

Thick walls of stone still stand today as they have for almost one thousand years.  The upper floors are long gone, but these foundations show the Louvre in its rawest form.  As you leave this display and enter the rooms of the medieval palace, remember these humble beginnings as you are about to be dazzled by the Louvre as it would become.

The rooms that today house almost seventy thousand works of art, are a road map of how the fortress evolved into a palace. A place that hosted the royal family and was a massive display of the wealth of France to all who entered.  That was the intention.  Wealth meant power in medieval politics as is true today.  As a result, the palace that remains is massive – over 650 thousand square feet.  Even though only seventy thousand works of art on display, it houses 380 thousand and is the largest museum in the world.  But imagine a time when only the royal family and their court strolled these halls. 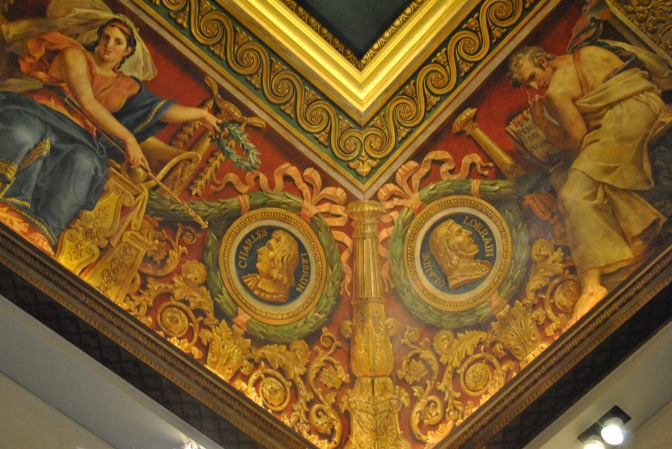 The ceilings alone are works of art that are reminiscent of those at the Vatican.  The long halls, today perfect for displaying art, once held courtiers and served as audience chambers for the Kings of France. They were designed for impact and they still impress all who enter them today. 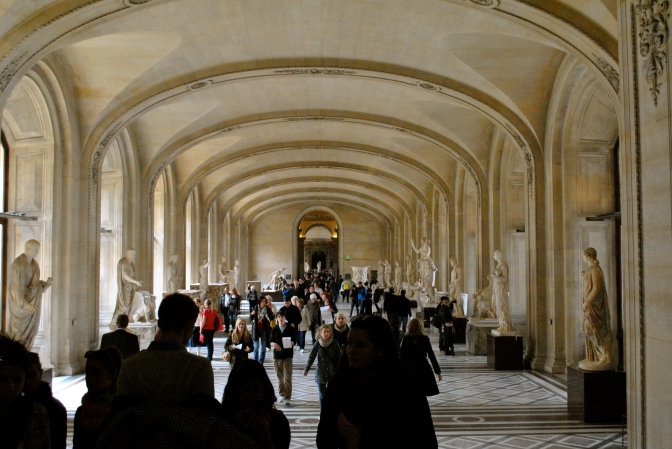 Notice the marble floors under your feet. They reflect intricate patterns that are delicate in design, but strong enough to withstand the fifteen thousand visitors per day that the Louvre receives these days. Glance out one of the many windows that stare into massive courtyards, some of which have staircases large enough for horses.  They are incredible works of symmetry and grace, often overlooked by visitors who never look away from the art to see the building itself. 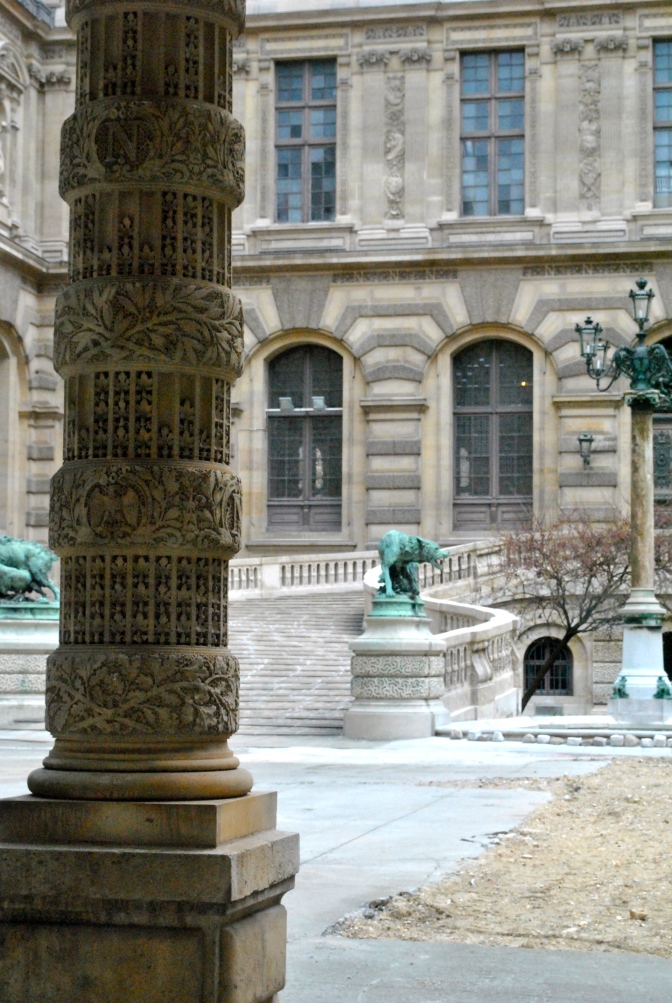 What a fascinating place this is…if you are lucky enough to visit, find an alcove somewhere away from the crowds and imagine the history these walls have seen.  Learn the stories of Diana de Poitiers catching the eye of the King of France when she was a courtier here in the 16th century.  Discover the sad life of Catherine de Medici, a plain woman from a powerful Italian family, who just wanted the love of her husband.  Find out how the Nazi’s used the Louvre as a place to house all the art stolen from across Europe during the reign of the Third Reich.  Learn about Napoleon’s desire to rename the museum after himself. 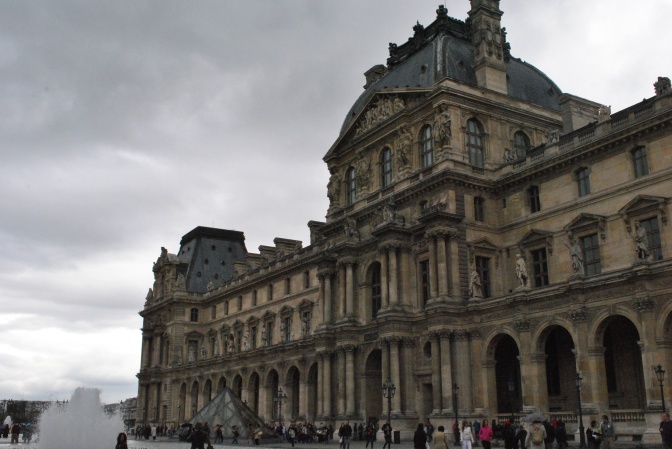 These are just a few of the fascinating stories that have unfolded within these walls – long before the Mona Lisa or the Venus de Milo found a home here.  This place was once so full of life and was the epicenter of French history for several centuries.  By all means, come to see the art, as it is very worthy of a visit, but don’t forget about the building itself – the largest exhibit in the largest museum in the world.  Do your homework ahead of time by learning some of the history and let your imagination do the rest.

I promise it is worth the effort.