We knew it was possible.  As we loaded up the car to drive the eight hours to the coast of South Carolina for our annual family vacation, a monster category 5 hurricane was churning in the Caribbean.  The first couple of days after we arrived, we set about our usual vacation routines – sun, rest, reading, and seafood, but all the while, we kept one eye on the television hoping the storm would turn back out to sea.  As time went on, the track became more ominous. It had a name.  Matthew.  By Tuesday morning, it wasn’t a matter of if, but when.

That evening, the sunset was beautiful – more so than normal.  It was if Mother Nature was giving us a gift before she set about taking it away.

By Wednesday there was talk of evacuations.  Other families in houses nearby began to pack up and leave.  By the next morning, things looked a bit bleaker.  The early morning sky was quite a bit more ominous.  Adding to the foreboding atmosphere was the fact that there was no one out, houses began to be boarded up and the surf picked up its assault on the shore. 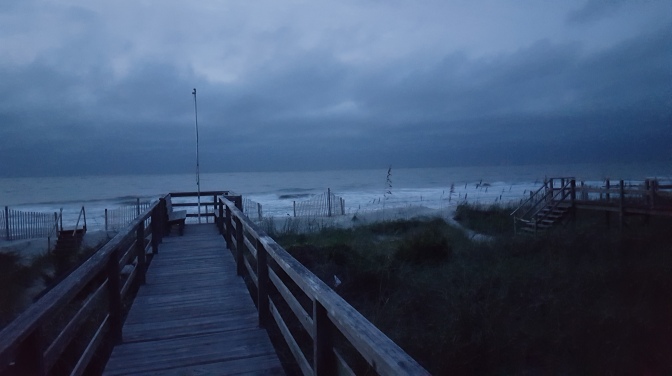 We made up our mind to leave early Friday morning, just as the outer bands of rain would start to impact our location.  The night before, we sat out on the back porch, listening to the sound of an angry ocean.  You don’t know eerie until you’ve heard a police bullhorn attached to the top of a squad car announce a mandatory evacuation as you sit drinking a beer and staring out at a dark, ominous ocean.  Even though we knew we were leaving first thing the next morning, it felt as if we were hanging on the edge of a cliff, just waiting to see if we’d be pulled back or tip over the side.

Before turning in for the night, we moved all outside furniture inside the house.  There was one last walk down to the end of the deck by the ocean – a walk I’ve taken on many nights before, but this night it was different. It was pitch black out as the sky was cloudy, so no stars.  Tales of the Gray Man, a ghost who apparently appears walking on the beach before bad storms, ran through my mind as I sat listening to the surf.  I didn’t try hard to see anything as I was afraid I would.  It was an eerie – like something bad was coming.  You felt the need to flee.

We left as the rain began to fall the next morning. We drove off the island to Florence looking for a hotel, but continued on north into North Carolina…to the town of Lumberton.  We found a room and booked the next two nights, thinking we were more than 75 miles from the coast and should be well away from danger. We passed the night and the next day riding out the storm.  Entertainment consisted of watching the weather.  At one time we had a hurricane warning, a tornado warning, and a flash flood warning all at the same time.  All through the day we watched the sign of the hotel next door as the 40-50 mph winds worked away on it and it began to tilt. 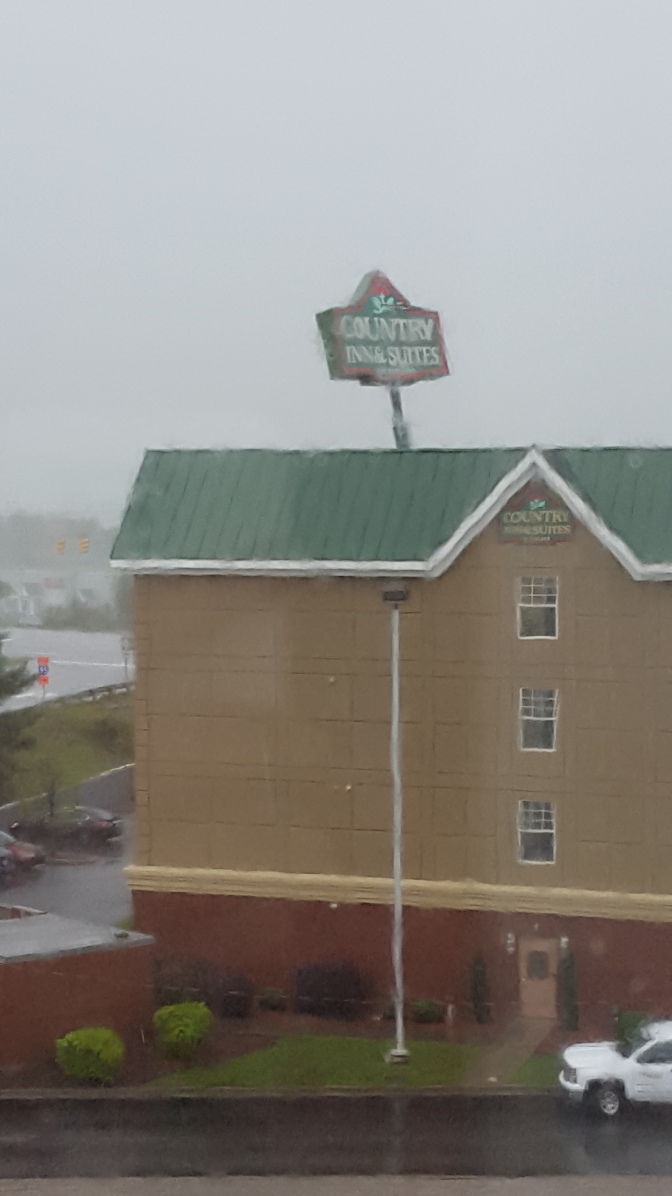 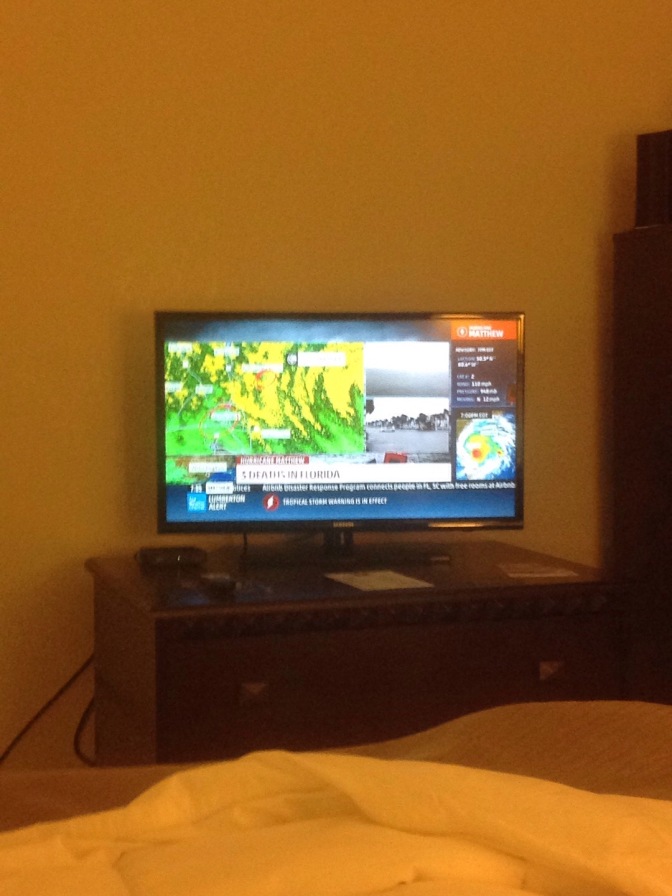 Late that afternoon we finally lost power in the hotel.  We headed down to the lobby where other guests were playing cards and drinking wine by flashlight.  We decided to head out and find some food before it got dark.  There was flooding in areas and no power anywhere, so the only place to get a hot meal was the local hospital.  We were lucky and dined on egg rolls, rice, and fries – about all that was available.  As we left to head back to the hotel, the wind and the rain were still present, but had slacked off a bit.

That night we spent the evening reading a book out loud using a flashlight.  We knew there was some flooding down the road as we could see the police lights where they had the road blocked off.  Over the next few hours, those lights seem to inch closer up the road, or at least that’s what we thought, but it was very hard to tell in the pitch black outside.

We awoke the next morning to this view:

This was the hotel next to ours.  People were wading out in almost waist deep water with their belongings held above their heads.  We headed down to the lobby to assess the situation and found other guests doing the same thing.  Some had walked to the end of the drive to find out the situation.  There were rumors of people missing in flood waters nearby.  We could see boats being used to search the rising water.  We left and went the opposite direction, hoping to find a hot breakfast back at the hospital, but no luck.  With the power out, the hospital had to lock down their resources to feed staff and patients – the public was no longer admitted to the cafeteria.  We headed back to the hotel to only find the situation had deteriorated further and now our hotel was threatened. 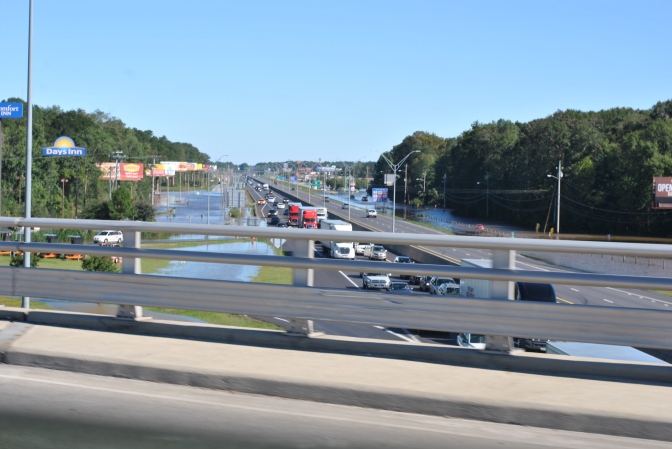 We climbed the four flights to the top floor, packed our things and headed back down to leave for higher ground.  As we’d come into the hotel, water was close to being at the back door and a side road was completely covered. 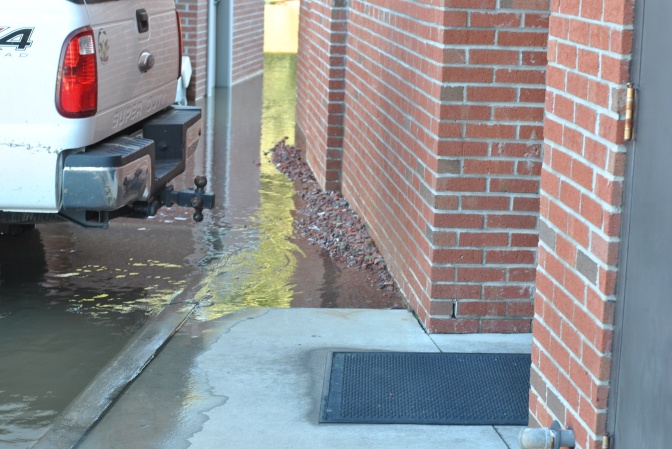 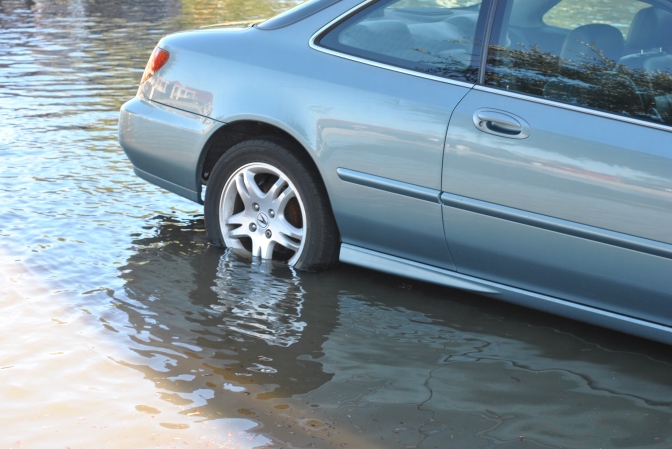 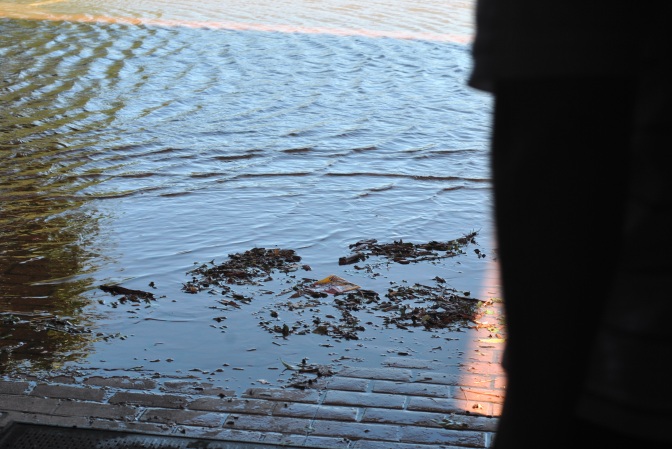 We spent the next five hours trying to get out of Lumberton, North Carolina.  Slowly we made it out of downtown.  All traffic from I-95, including dozens of semi-trucks had been routed through Lumberton to get around the fast expanding flood zone. Every side road we tried to take was flooded. 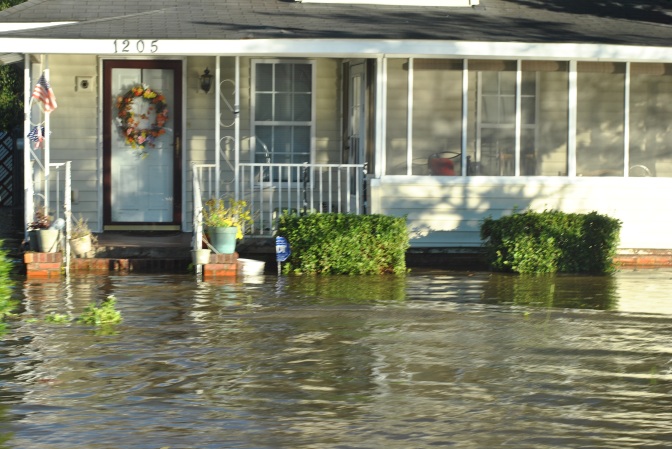 By late afternoon, we had only gone a few miles and found ourselves in a painfully slow moving line of traffic on a four lane highway.

It was only when we finally got closer that we realized the problem – the road was covered by almost two feet of water.  This was the best option for getting out of Lumberton, so everyone moved forward slowly as the water rose.  Those in SUV’s (like us) seemed to be ok as long as they kept moving, but cars began to stall out.  In one particularly deep portion, the car in front of us stalled out, as did the car next to us.   For a few scary moments, we were absolutely stuck in the middle of raging floodwaters – we couldn’t go forward.  We couldn’t go back. We couldn’t go around. Not where you want to be – I continuously found myself repeating the mantra ‘turn around, don’t drown’ in my head – too little, too late. Luckily the car next to us was pushed out of the way and we were finally able to get around the car in front.  We, like everyone else, were trying to stay on the high part of the road as beyond that, you couldn’t tell where the road ended and the ditch (and deeper water) began. The following photo was taken from the window of our car:

As we finally made it to the other side of the worst of the flooding, the overpass of I-95 was within our site.  Little did we know that it too was under water…