It sits, staring out over the marsh, like a great ship floating on the green-gold grasses of the tidal creek.  Its rusty tin roof provides the only color contrast to its otherwise white exterior.  Built in the days of the great rice plantations, the P.C.J. Weston House on Pawleys Island, South Carolina, still stands to greet anyone crossing the south causeway to the island.  Back when it was built, there was no causeway.  The only way to reach the island was by boat.

It was built by Plowden Charles Jenette Weston in the 1850’s.  Weston was owner of nearby Hagley Plantation and he built the house as a summer escape from the mosquito infested swamps that cover the lowcountry.  Out on Pawleys, he and his wife could live comfortably with the constant ocean breeze keeping the mosquitoes at bay.  They named it Westonzoyland, but today it is known as the Pelican Inn.

Although Weston was born in 1819 in London, his father, Francis Marion Weston was from South Carolina. The younger Weston was educated at Cambridge and met his future wife through a friendship with her brother.  They married in London before coming to South Carolina to take up residence at Hagley Plantation.  Weston’s father had obtained Hagley from the Alston family in 1837 and Weston had been receiving the yearly profit from the plantation since the early 1840’s. He didn’t come into full possession until the early 1850’s. By 1854, Plowden Weston had combined Hagley with nearby Weehauka Plantation and had built one of the finest homes in Georgetown County.  It was a place he dearly loved.

Sometime in the 1850’s, Weston and his wife decided to build their summer-house on Pawleys.  Weston had purchased a little over five acres on Pawleys a few years earlier.  Other planters were also building on the island.  It was a refuge from the heat during the stifling South Carolina summers. The boards used to build what is now the Pelican Inn were milled at Hagley Plantation and numbered so they could be reassembled on the island using wooden pegs and hand cut nails.  Although they had no children, the Westons must have spent some happy years at Pawleys. Mrs. Weston left behind an array of beautiful sketches of the island and other places around the Waccamaw Neck. Weston himself was the founder of the South Carolina Historical Society and was said to be a very scholarly man.

By the outbreak of the Civil War, Weston was also a very wealthy man.  The 1860 census valued his land at $146K and his personal assets at $873,750.   In August 1861, Weston joined the Georgetown Rifles, part of the 10th South Carolina Infantry.  He was soon promoted to the rank of captain, but refused any further promotions.  Unfortunately he had contracted tuberculosis by 1862. He was granted furlough several times during 1862 due to the effects of the disease ravaging his lungs.  In January 1863 he resigned from the Confederate Infantry after being appointed Lieutenant Governor of South Carolina. By early 1864, he was dead of tuberculosis.  Some say that Weston really never left Pawleys, even upon his death.  To this day there is speculation that the old island legend of the Gray Man could be about Weston. But that is a story for another day.

At any rate, at the time of his death, Weston was worth a little over $500K.  A huge amount considering the poverty level of most of the South at the conclusion of the Civil War. Included among this amount was a library valued at $15K, over 100 dozen bottles of wine valued at $36K and 185 human beings valued at $370K.

Prior to his death, Weston and his wife had left the coast for fear of attacks by Union gun boats.  They moved inland to Snow Hill, near present day Conway, South Carolina, never to return to Hagley or their summer-house on Pawleys. Weston was buried near the places he loved on the Waccamaw Neck. After his death and the settling of his estate, his wife left for England, never to return. 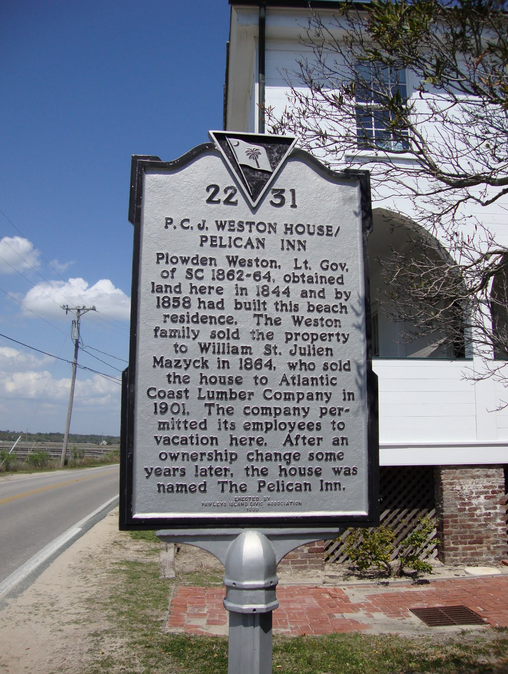 Over the years, Hagley fell into ruin and eventually burned in the early twentieth century, but the house on Pawleys survived.  Today it still stands sentinel over the marsh.  It is a reminder of life as it once was along the Waccamaw Neck.