Sometimes life gives you a gift – a little morsel of bliss offered up just through good timing.  Such was the case one cold winter night in Berlin.  It was late.  We had spent the day trudging all over Museum Island.  Either due to poor planning or a sense of adventure, we found ourselves standing in front of the Altes Museum.  Before us was one of Berlin’s wide open spaces.

Since the end of World War II, Berlin has been completely reborn – cranes continue to dot the skyline as the Germans continue to try and erase the destruction wrought by one man’s quest for supreme dominance.  It was here, in the very space in which we now stood that Hitler, a name synonymous with wickedness, once rallied his evil empire.

As we walked through the Lustgarden and towards the still bustling Unter den Linden, we found ourselves passing the Berliner Dom.  Like much of Berlin, almost completely destroyed in the war, this beautiful church and it’s grand dome have risen again like a phoenix from the ashes.  The official cathedral of the city and its largest, the current edifice stands on a site occupied by a religious structure since the fifteenth century.  In a city as newly built as modern Berlin, it’s easy to forget that this place is actually very old.  This church and its Lutheran history can be traced back to Martin Luther.  Although the version destroyed in an air raid in 1940 wasn’t very old, the land on which it rested is one of those spots that humanity for some reason has consistently considered sacrosanct.  As a result, as one version falls, another rises to take its place.  The current building only dates to 1953. 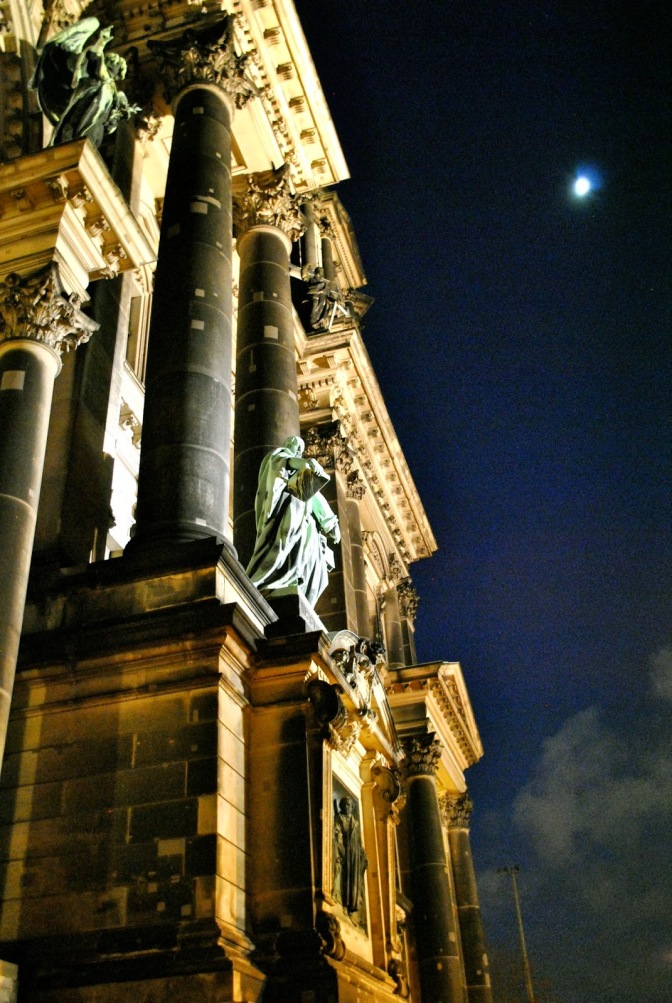 It was one of those winter nights in Germany where the very air stung your skin as the wind funneled between buildings.  Dumb me had on a flannel cape and gloves, but under that only a short sleeved shirt.  You get to the point after being out in this kind of cold where you just grow numb and I had reached that point.  As we walked past the Dom, we noticed people were actually being let inside, which was unexpected as it was after closing time.  We climbed the stairs and determined that as long as we pretended we meant to be here walking through the door, we could escape from the cold for just long enough to allow for the feeling to reestablish itself in our extremities.

As we approached the door, a gentleman manning the entrance said something in German.  I, not knowing my strasses from my ausfarhdt, answered his unknown question with a nod of conviction and a German inflected “yes” as we didn’t hesitate for him to object and headed inside.  Apparently that was all it took, even though we looked the part of frozen tourists, even with camera in hand.  It was time for vespers and we had been allowed into the Dom to participate. 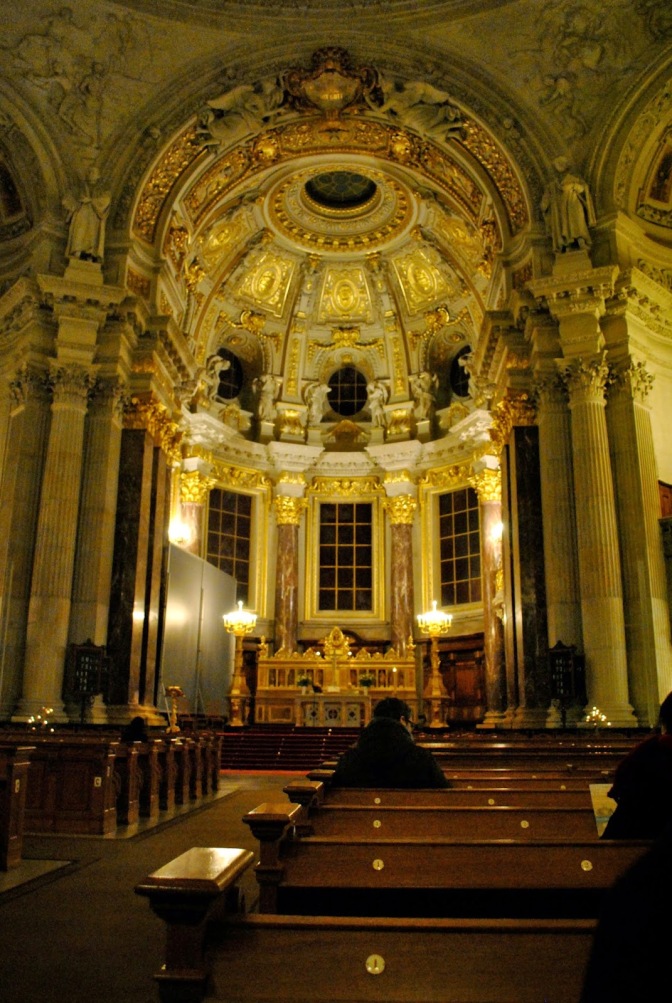 The Dom itself is masterful in its elaborate detail.  White carved angels and golden embellishments glowed under the flicker of soft light and candles.  There were very few people inside and as the service began it really felt like we had been allowed a glimpse into the life of the real Berlin.  There was  preaching and singing, all very simply done.  But is was the absolute peace that radiated throughout the grand space that was mesmerizing.  The man across the aisle to my left was elderly and alone.  He seemed very lonely – like he was traveling a very dark road and was hoping to find a roadmap back to the light by being here.  Even though I could only imagine his true story, somehow in this huge space, every person was encapsulated in his/her own bubble with just the silence for company. What a beautiful and unexpected experience to stumble across on a cold winter night.