The gray clouds hung oppressively low in the sky as I exited the tube station. Dewy drops like tears gently misted the entire landscape. This wasn’t an angry rain – more like a sad one – fitting for my destination. Huddled under the hood of my navy windbreaker, I crossed the Thames via a bridge adjacent to the station. The weather had discouraged many others from following my path and I walked seemingly alone up the driveway to the palace in front of me.

Hampton Court. It automatically congers up images of scheming courtiers hovering in dark corners looking for their opportunity to break from the crowd; all the while the gluttonous Henry VIII overlooks their machinations with a powerful gleam in his eye. It brings to mind jewel toned gowns sparkling in the glow of candlelight and raging fires in massive hearths. To my mind’s eye, Hampton Court has always embodied all that’s appealing in nestling up to a good book in front of a warm fire during a thunderstorm. Cozy comfort with an edge – you can relax somewhat immersed in your good read, but all the while you know a storm is raging. Being a visitor in the court of Henry VIII had to be very much like this experience as well.

As I made my way to the front entrance, I noticed signs that explained an archaeological dig of Cardinal Wolsey’s original moat. No longer existing, but its fingerprint in the earth remains. Looking down at Wolsey’s moat it seemed to me that his former home had taken on his identity much more than that of Henry VIII. Wolsey was perhaps one of the most adaptable figures in Tudor history, molding his concerns to those of his monarch. Doing this had allowed him to rise high and quickly. It also enabled him to survive longer than most of those close to Henry VIII. Eventually he too would displease the famously volatile monarch , leading to his downfall. He’d rebuilt Hampton Court as his private home, but lost it to Henry VIII, proving that over the years, Hampton Court eclipsed Wolsey in its ability to shape-shift its usefulness. Added to and expanded over the subsequent centuries, Hampton Court remains as one of the few Tudor dwellings still in existence, far outlasting those who called it home.

Passing through the main gate and into Base Court, I could almost hear the sound of hooves on muddy ground as a rider from centuries ago came to an abrupt halt, sliding from his horse to race with an urgent message for the king. All the while, daily life in this, one of the outer courtyards of the palace, plodded along.

It must have been colorfully real – visitors coming and going, muddy wagons filled with the possessions of nobility as they arrived to court and settled into one of the forty-four rooms encircling Base Court. All this life lies in stark contrast to the scene today – misting rain and just a few scattered tourists. Dark windows once so full of life stare down on the court with haunted and sad eyes – mementos of a time long passed… 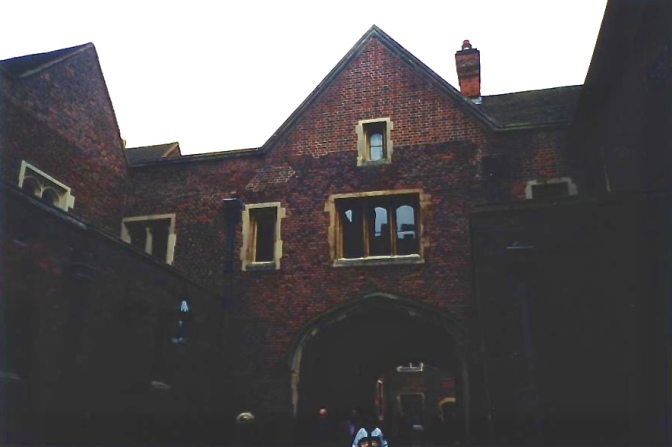 2 thoughts on “Cozy Comfort…With An Edge”