It had been snowing on and off all day.  The air was crisp with cold.  The lights of Prague glistened off the frozen terrain as afternoon faded to evening. People strolled about in the old city, snug in their coats and scarfs.  Through the windows of restaurants, diners sat warm and snug, drinking bottles of wine with their early supper.  It was a special night – a night that the Rudolfinum welcomed home its Maestro…

…in a manner of speaking. 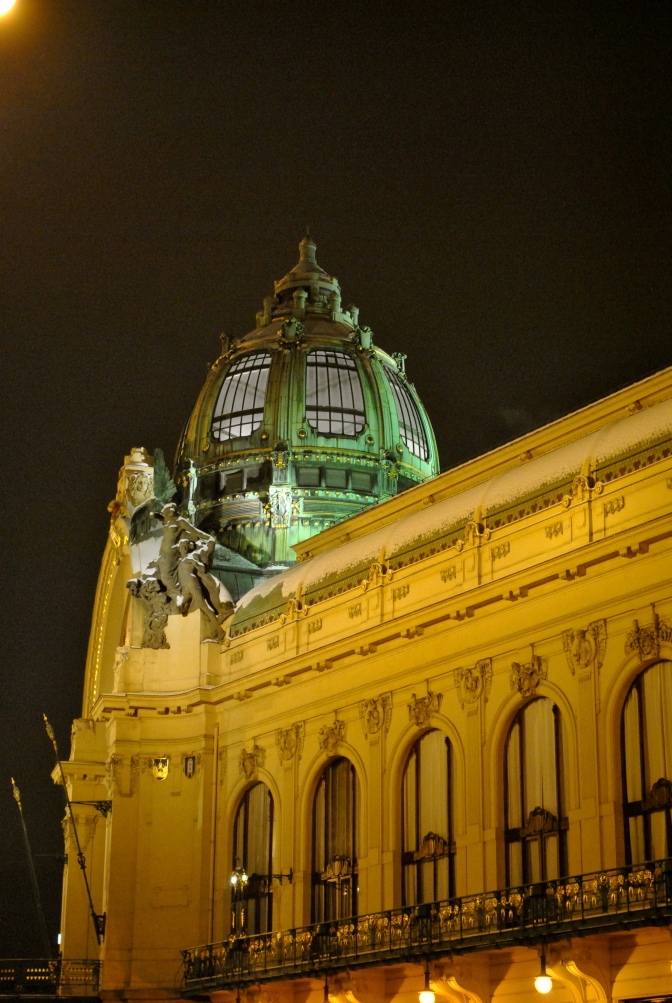 The Rudolfinum is a grand building that sits on the banks of the Vltava River.  During the daylight, its Neo-Renaissance facade proudly stands its ground in the middle of one of the oldest parts of Prague.  At night it is a shining jewel in the glistening crown that is Prague. It was built in the late 19th century as a multi-purpose cultural center.  It has served as an art gallery, a conservatoire, a parliamentary hall and even a canteen.  Most notably it has been the home of the Czech Philharmonic since 1896, the year of its first performance.

Tonight we would be seeing a performance in Dvořák Hall, but not just any performance.  We would be seeing a performance of one of Antonín Dvořák’s best known pieces – the Cello Concerto in B Minor – in the hall named for him.  For you see, when the Czech Philharmonic first performed here over one hundred years ago, it was  Dvořák’s baton that led them.  To this day he is one of the most well-known composers to come from Prague.

We entered via the grand front stairs, stopped by the coat check and proceeded up the stairs to our seats.  The symmetry on display inside Dvořák Hall is majestic.  Huge marble columns soar towards the ceiling and are capped by Corinthian heads. Beautiful globe chandeliers dot the room.  Sitting center stage, quite literally, is a massive pipe organ.  The ceiling is intricately decorated with blue, orange, and gold ornamentation, but the walls remain bare.  The acoustics are phenomenal perfection.

We spent the next ninety minutes or so completely entranced.  The music was haunting and very much reminiscent of old Prague – powerful crescendos worked their way up and down the scale.  The sounds of the lone cello soloist were heartbreaking. At times the music was like the feel of vodka on a cold winter night – numbing, but full of fire and warmth. This was the soundtrack to Eastern Europe more than anything I have ever heard.  It was powerfully beautiful and delicately dramatic, all at the same time.

Beyond the music, it was hard to believe the momentous history that this very room had witnessed. It had survived all these years intact despite re-purposing several times over the years.  It had seen the glory days of Prague and had walked through the dark days of Nazi Germany when Hitler’s birthday was celebrated here.  Through it all the heart of this room remained with music.

Rest assured, the muse is very much alive in Prague today.

3 thoughts on “A Night with the Muse”