…continued from A Roundabout Whim…

After a bit of a reality check trying to drive myself out of Glasgow, I settled into the feel of driving on the opposite side of the road.  By the time I neared Bannockburn, I was ready to pull over for a break. And what better thing to do than have breakfast on a bench overlooking the site where Robert the Bruce stormed to victory over the English.  Well, it may not be the actual site, but let’s just pretend for the sake of argument. 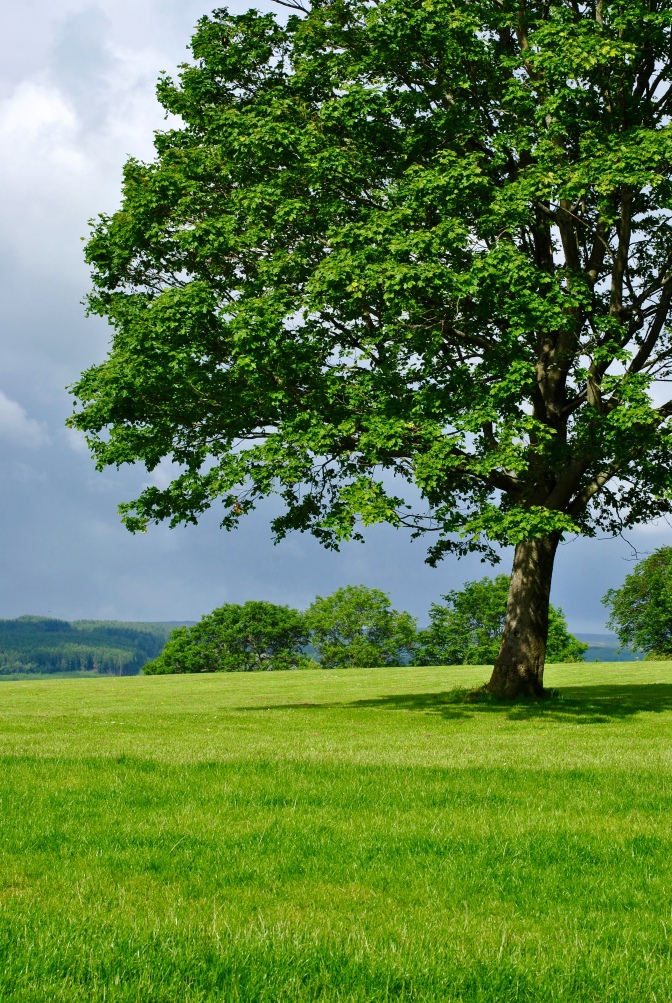 I hadn’t planned on making a pit stop at Bannockburn, but when I saw the sign, I just couldn’t resist.  On my last (and only other) visit to Scotland back in 1996,  I spent some time in Stirling and really wanted to make it over to Bannockburn, but chickened out due to logistics – I couldn’t figure an easy way to get there.  I’d always regretted not going, so now I was back, twenty years older and I was determined it wouldn’t escape me this time.

I pulled into the parking lot of the visitor center.  The place was deserted as it was still rather early in the morning.  Before leaving the airport in Glasgow, I’d stocked up on a sandwich, some “crisps” (chips to we Americans), and a Diet Coke, along with some water.  I stuffed all this in my camera bag, locked up the car, and took off down the footpath that led behind the visitor center.

I grabbed the first bench I saw and sat down for my early morning feast – just me, the warm morning sun, and the ghosts of a battle that had happened seven hundred years ago.  It was the beginning of a gorgeous day.  Experiencing the battlefield without any one else around was pretty cool I have to say, but there was something different about Bannockburn – it didn’t have a sense of place like other battlefields I’ve visited.   For example, something about walking around Culloden Moor makes you know, deep down in your bones, that something substantial happened on that ground.  It has an eerie feeling about it.  Bannockburn doesn’t feel that way.  In fact, it didn’t have much of a feel about it at all. Maybe there is something to the theory that this isn’t the right spot – who knows?

After finishing up breakfast, I headed down the paved pathway towards the monument itself.  By this time, there were some locals about, walking their dogs through the dewy  green grass.  It seemed weird to see this on such a revered place, but it was also a perfect representation of how the Scots seamlessly move between the present and the past.  History is all around them – they live among the ghosts, so I guess they’ve become experts at incorporating it into the trivialities of daily life.

The monument itself is a giant circular arena that you can walk into.  Inside is a poem by Kathleen Jamie that is inscribed along the rim of the rotunda:

Here lies our land: every airt

Belonging to none but itself.

We are mere transients, who sing

Its westlin’ winds and fernie braes,

‘Come all ye’, the country says

You win me, who take me most to heart.

A striking thing to read really.  It underscores the permanency of this land, despite the passage of time.  The land is the common thread throughout the ages and it remains despite men coming and going.  Robert the Bruce was just passing through and what he fought for is still real and present in this place.

Beyond is the famous statue of Robert the Bruce on horseback, staring out over the site of his victory all those years ago.  After the rebellion led by William Wallace came to a tragic end, all seemed lost for the Scots to have independence from England.  Robert the Bruce came along and changed all that with the victory on this field.  In a modern Scotland, where independence is still an elusive target, having a reminder of this great victory must be bitter sweet.

Before turning back towards the car, I spied Stirling Castle in the distance.  There it sat – on top of a great extinct volcano – the gateway to the north and the highlands beyond.  It was ironic to see how close it is to Bannockburn.   Wallace won at Stirling Bridge but he was eluded the great victory that the Bruce later won at Bannockburn.   But it can also be argued that the Bruce couldn’t have won if it hadn’t been for what Wallace started – a movement that would see nothing less than independence from English rule. And they got it….if only for a while…

2 thoughts on “Breakfast with the Bruce”